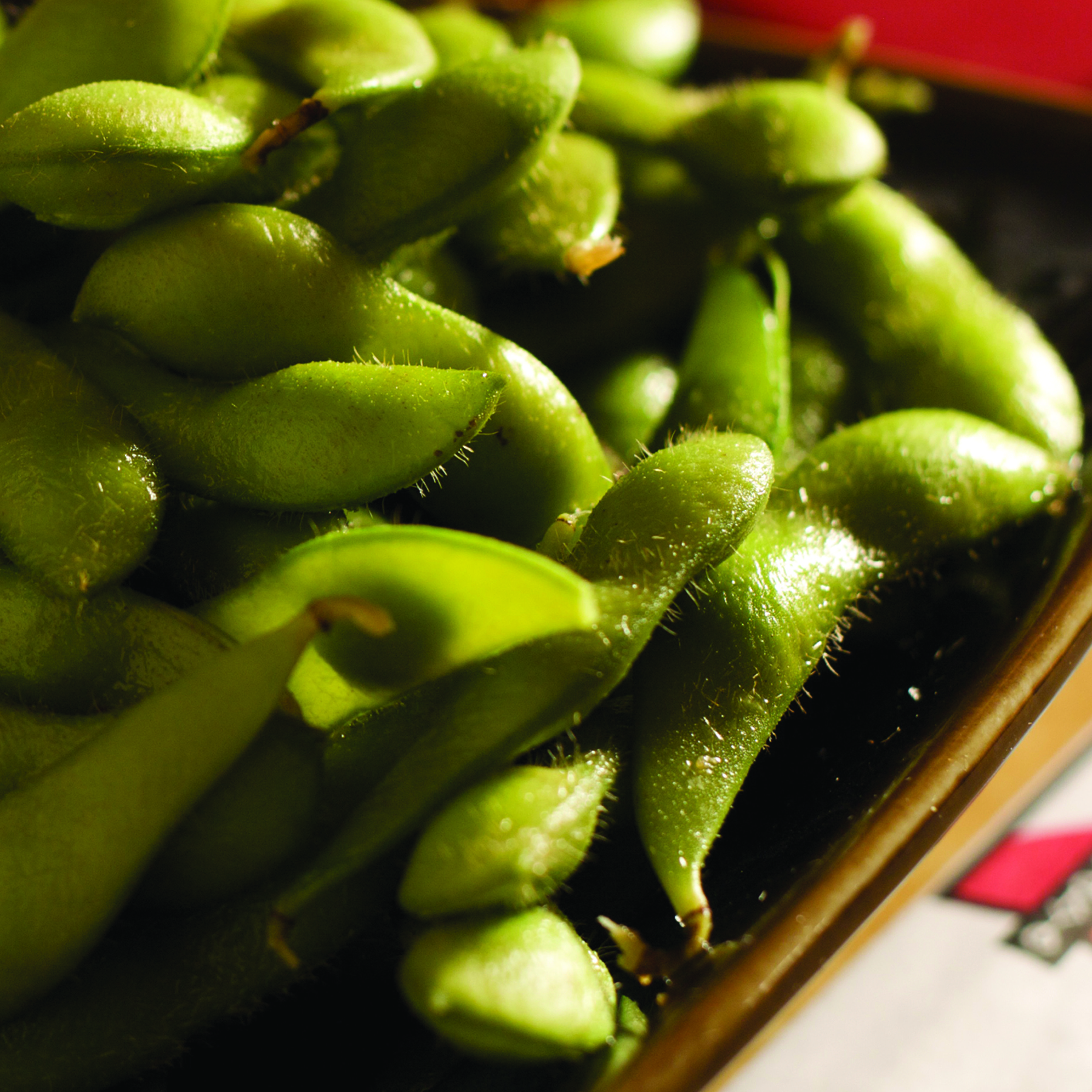 One of the favorite Japanese snacks we serve at Hurry Curry of Tokyo is Edamame – young soybean pods boiled in salty water. Hot edamame is a favorite summer time snack in Japan. While soybeans have a time honored place as the key to a balanced Japanese diet, modernly edamame is known as “beer’s best friend”.

The word “edamame” translates as “beans on branches” because the pods grow in clusters on bushy branches. One of the earliest ways to prepare edamame was to boil the pods on the branch as is ; it is often sold still on the branches in Japanese supermarkets. In the US, edamame is harvested just prior to “hardening” time, parboiled and quick-frozen.

Soybeans were brought to Japan from China possibly as early as 540 AD. The first written mention of edamame is found in 927 A.D. in a guide to trade in agricultural commodities. From early times, rice has been the main staple in the Japanese diet and a cornerstone of Japanese culture. In feudal times, meat consumption was all but prohibited due to Buddhist strictures. Soybeans nutritionally provide essential proteins missing in rice. Economically, growing soybeans made sense as well. Farmers grew soybeans on the narrow, raised ridges separating rice paddies for their own consumption as a critical nutritional supplement. While the rice paddies belonged to the feudal lords, the narrow ridges between them “belonged” to the farmers. This practice continues even today in rural areas, with patches of soybeans and edamame scattered among the ripening rice.

Today, Japan is the largest commercial producer of edamame as well as the largest importer of the bean. Almost all Japanese production is consumed as fresh product during the summer months.

Edamame is one of the most popular “otsumami” (drinking snacks) in Japan. Edamame make the nutritionally ideal snack when imbibing. Rich in Vitamins B1 and C, both of which help break down alcohol, it also contains methionine, an amino acid which helps protect the liver from toxicity damage. Additionally, the sweetness of edamame balance the slightly bitter aftertaste of beer. This combination is so ideal, there is even a strain of edamame seeds referred to as “Beer Friend.” !

So the next time you are enjoying one of our Japanese beers, be sure to order the beer friend as well. Here’s to your health – Kanpai!